FCT, Abuja – Security agencies have commenced investigation into the killing of an army general, Hassan Ahmed, who was shot dead by unidentified gunmen along the Lokoja-Abuja road.

PR Nigeria reported that troops of the Nigerian military and other security agencies have launched an aggressive joint operation at the Koton Karfe axis of Kogi state, where the officer was attacked.

His sister, who was in the vehicle with him, was reportedly abducted by the gunmen while his driver escaped. Recently, the Koton Karfe axis has been a hotspot for kidnapping by armed bandits, who usually target motorists. Aside from the incidence of kidnappings, bandits also receive ransom for persons they abduct at their enclaves, within the axis.

The Guardian reported that the late general was the former Provost Marshall of the Nigerian Army.

The body of Maj.-Gen. Ahmed was buried Friday, July 16, with full military colours and compliments at the Guards Brigade Cemetery, Lungi Barracks, Abuja, in accordance with Islamic rite.

The army spokesman, Brigadier General Onyema Nwachukwu, said the army has paid a condolence visit to the family of the deceased.

“A delegation from the Army Headquarters led by the Chief of Policy and Plans (Army) Maj Gen Anthony Omozoje has visited the widow and other members of the bereaved family.” 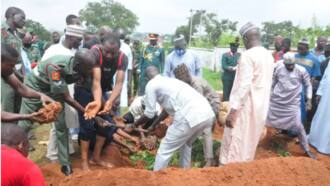 In another news, gunmen again struck late Friday night, July 16, in Igangan and other communities in the Ibarapa area of Oyo state killing at least four residents.

The Nation reported that the attack was, however, repelled by the swift response of local security operatives.

The commander of Amotekun Corps in Ibarapa Central simply identified as Muri was among those killed during the attack.