2023: APC Chieftain Says Southeast’s Support for Tinubu Will Be Unprecedented 2023: APC Chieftain Says Southeast’s Support for Tinubu Will Be Unprecedented


Awka – A group, South East for Tinubu (SET), has declared that Asiwaju Bola Ahmed Tinubu will receive massive support in the southeast and south-south during the 2023 presidential election.

The convener of SET, Nwosu Emmanuel, made the statement in Awka, the Anambra state capital on Tuesday, March 1.

Speaking at the group’s inaugural meeting in the southeast state, Emmanuel said SET has begun massive mobilisation through public enlightenment and persuasion to ensure Tinubu wins the hearts of voters in the region.

2023 presidency: I’m ready to fight anyone who opposes my ambition – Tinubu

He said Tinubu would win more votes in the presidential election in the southeast and south-south than any other candidate that had contested in recent time, adding that the former governor of Lagos paid his dues in Nigerian politics.

“There is no politician in this country that has recorded the feat Tinubu has recorded in politics. He is a builder of men and resources. In Lagos, he laid a master plan, midwifed and engineered it, and Lagos becomes what it is today.

“Tinubu is the only politician in Nigeria that has mentored the highest number of politicians; strategically pooling them, placing them in strategic positions, and giving them wings to fly.

“He kept helping others to become what they wanted to become; while his contemporaries were busy contesting the presidential position. This is the kind of leader that will build Nigeria and its people.

“It is our belief that Tinubu is the most qualified for the president and northerners are already mobilising for him.

“If the southeast also gives its support, it will succeed in building good alliances, friendships and bonding that will make others accept and support its candidate in the next opportunity.

“Instead of agitations, the southeast should start to negotiate, build friendship and alliances, to grab future opportunities.”

2023: Tinubu asked to step down for VP Osinbajo

Meanwhile, Tinubu has been urged to drop his presidential ambition and rally round Vice President Yemi Osibanjo for the 2023 presidency.

The convener and national coordinator for Osinbajo Support Movement, Badmus Olawale Liberty, made the call in Abuja on Wednesday, February 16.

Liberty said even though Osinbajo has not publicly declared his intention to contest for the office of the president come 2023, the group will compel him to run. 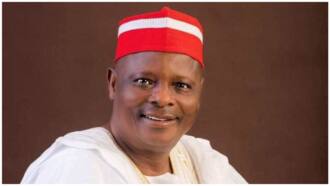 On its part, the Tricycle Owners Association of Nigeria (TOAN) on Tuesday, February 15 backed the candidacy of Osinbajo towards the 2023 presidential elections.

The national chairman of the association, Alhaji Shehu Tata Sule, said TOAN is ready to work with pro-Osinbajo groups towards achieving the goal of the vice president succeeding his boss in 2023.

He added that TOAN will establish synergy and harmonisation of their plans with pro-Osinbajo groups which will, in turn, germinate a solid support base for the project.