According to the newspaper, General Babangida expressed his support for Saraki when a delegation of the Abubakar Bukola Saraki (ABS) National Campaign Advocacy Council visited him at his Minna Hill top residence on Wednesday, February 2.

2023 presidency: I am not sick – Bola Tinubu finally speaks on his health

Legit.ng gathers that the delegation was led by its chairman, Professor Hagher Iorwuese and Director-General, Chief Osaro Onaiwu.

IBB was cited as saying Saraki knows Nigeria well and should lead the country for maximum results.

He was quoted to have said:

“Am glad to have found people who have defined who a true Nigerian leader should be. This definition was lacking. Am happy you have identified someone who can do the job. The narrative has to change. I know your client very well. I am part of him. His father was very close to me.

“You have zeroed on a good candidate. I call him SP. In the artillery we have a Self Propelled gun called SP with strategic responsibility and functions. That is who he is”.

The leader of the large delegation, Prof Hagher had asked for IBB’s blessings and support for Saraki, who is within the youthful age canvassed by IBB himself for the leadership of Nigeria. 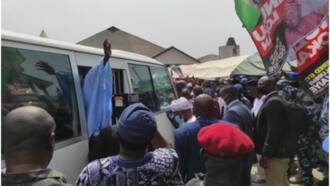 Legit.ng notes that Asiwaju Bola Tinubu, the national leader of the APC and presidential aspirant, had also earlier visited IBB.

Tinubu and his delegation were at the hilltop mansion of the former Nigerian military ruler in Minna, the Niger state capital on Thursday, January 20.

Speaking to journalists after his meeting with Babangida, Tinubu said:

“I came to Niger state to commiserate with the governor and the people of Niger state. And so, I can’t stop by without paying a courtesy call to the enigma, General Ibrahim Badamasi Babangida.”

Though he is yet to officially declare interest in the presidency, former Vice President Atiku Abubakar also visited Babangida in Minna on Tuesday, February 1.

Meanwhile, some stakeholders of the PDP from the North-Central zone of the country, have endorsed Saraki as their candidate for the Nigerian presidency. 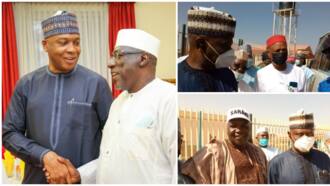 According to the leader of the delegation, Iyorwuese Hagher, it was time for the geo-political zone to produce the next president of Nigeria.

“The nation right now is so divided and fragmented. We need a uniting force, which the North-Central is known for, to emerge and reunite the country again.

“Bukola Saraki is that young breed with wealth of experience at every cadre of governance to restore Nigeria to where we belong. We do not need an old man as president who will be travelling every moment for treatment and spending the country’s resources abroad.”