Both politicians from the topmost political parties met at the Nnamdi Azikiwe International airport, Abuja.

The former PDP boss was with his wife when he exchanged pleasantries with the former Lagos governor and presidential aspirant in the 2023 general elections.

Photos that captured moments when the duo met were shared by Buhari Muazu Abubakar, the director of contact and mobilisation of the Muazu support organization. 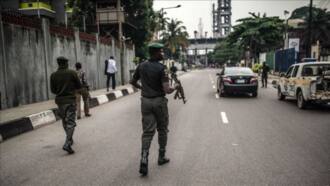 “They exchanged pleasantries together with other people too in the airport as they meet.”

Meanwhile, Dr Iyorchia Ayu, the national chairman of the PDP on Friday, December 10, demanded that the APC began to prepare its handover notes.

The former Senate president made the remark in his inaugural speech at the Abuja International Conference Centre.

Ayu was inaugurated along with other newly elected members of the main opposition party’s National Working Committee (NWC).

The new PDP boss speaking further listed the damages the ruling party had caused to the country. 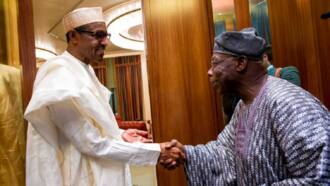 He noted that the APC made Nigeria the poverty capital of the world after inheriting the fastest growing economy in Africa.

While noting that a small group of individuals in the ruling party should not be allowed to continue to destroy Nigeria, adding that the PDP will make Nigeria the focus of development.