The presidential bid of Bola Ahmed Tinubu of the ruling All Progressive Congress (APC) has taken a positive twist ahead of the forthcoming 2023 general election.

Tinubu who has not been widely favoured in the southeastern part of Nigeria has received a huge boost after being endorsed by top monarchs and stakeholders in Ebonyi state.

As reported by the Daily Independent, the Ebonyi state traditional rulers council during town hall meeting on Wednesday, November 23 pledged their absolute allegiance to the presidential bid of Tinubu.

Chairman of the council, Eze Charles Mkpuma in his remark assured Jagaban as he is fondly called that his victory in the state is assured and sealed.

“We congratulate our incoming President, Asiwaju Ahmed Bola Tinubu on your success in the just concluded Presidential Primary.

“Our people are happy with you that you are here to see us even though we had resolved to support you and other Candidates of the APC.”

Meanwhile, Mkpuma appealed to Tinubu to consider zoning the senate presidency to Ebonyi state when he finally emerges victorious at the presidential polls.

Legit.ng gathered that the APC presidential candidate touched down in the southeastern state to flag off his presidential campaign in Abakaliki, the state capital.

Many political pundits and enthusiasts have presumed the southeastern region to be the stronghold of Peter Obi, the presidential candidate of the Labour Party. 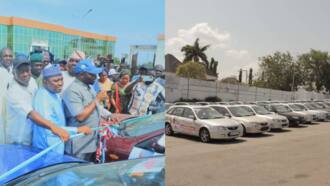 Meanwhile, Tinubu has been presumed to have his stronghold in the northern region, where he seems to have the strong backing of almost all the governors of the north in the region.

As it stands statistically, Tinubu looks like the firm favourite to have the day if things were to go as planned regarding the number of states that have endorsed his candidacy.

Most of the grossly populated states in the north and some parts of Nigeria have endorsed him, with Kano, Lagos, Kaduna, and Katsina leading the pack.