Nigerians have shown ingenuity in automobile design. It is safe to say with the right support, Nigeria may be the centre of the automobile industry on the continent.

A video of a tricycle (keke) which was redesigned to look like an expensive car is one of the several instances of thoughtful creativity in the country.

In this report, Legit.ng will be looking at three instances where different automobiles’ bodies were reconfigured to look more beautiful.

A young Nigerian man during his NYSC in 2020 decided to make use of the forced break many got as coronavirus ravaged the world.

Oladele gathered scraps and redesigned a Mazda car. The man who was very happy with what he achieved said that the project consumed his six months allowances.

Photos shared online have the scraps serving as motifs on the Mazda’s body. It looks like a vehicle from a Mad Max Fury movie.

A viral video of a keke with an interior commonly associated with big cars went viral on the internet.

The backseat was designed in such a way that a passenger can place a cup of drink in one of its holders.

Many people who reacted to the video said that passengers taking such a keke should be ready to pay more without complaining. Why is he frowning? Reactions trail video of Nigerian policeman carrying served food for ‘big woman’ at event

An indigene of Anambra showed off his creative side as he totally transformed the look of a Toyota into a Rolls Royce.

The man has, however, not revealed his intention behind the transformation. A photo shared online has him posing in front of the vehicle.

In some other photos, the interior of the car could be seen. Its doors open to the back like a real Rolls Royce.

What would it take to empower young designers/builders?

There are enough conversations on what the government may be doing or not in helping young people grow.

Private organisations and individuals looking for good returns on investments may start empowering young people who are technically skilled.

Meanwhile, Legit.ng earlier reported that a man, Frank Deangelo, amazed many online after he transformed a big plane into a vehicle that is 42ft long. 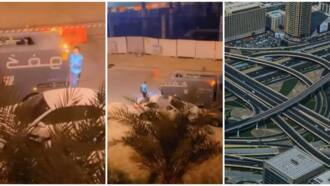 In a video posted by Ridiculous Rides, the man explained the whole making process. He said the plane fuselage was married into vehicles. About four whole vehicles were said to be infused to make the ride.

The man added that the craft is one of the few ones on the planet. Frank revealed that over $1 million (N410,820,000) was invested in the project.