Beneficiaries of the federal government’s Special Public Works (SPW) programme have complained over the reported non-payment of their wages for three months.

The Punch reported that some of the beneficiaries on social media questioned why their N20,000 monthly stipends have not been paid.

The aggrieved workers reportedly confronted the minister of labour and employment, Festus Keyamo (SAN), about the issue via Twitter.

“People are hungry regarding the payment of stipends. Please fast track the payment of these people. 774, 000 people waiting anxiously for their payment with hunger and they don’t even have phone to come to your timeline. When you get hungry just remember those people that work with hunger without their entitlement.”

The Nation reported that when he was contacted about the non-payments, Keyamo directed the enquiries to Abubakar Fikpo, the acting director-general of the National Directorate of Employment (NDE).

Fikpo in response said the issue would soon be resolved.

“We are still in the process; we have identified some loopholes here and there. We want to verify the BVN of the participants. That is why we are working with the banks. 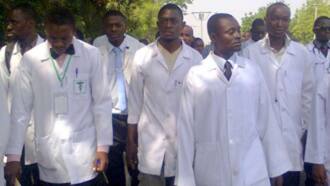 “We are verifying the BVN of those participants in order to avoid double payments to several people or to three or more accounts.”

Legit.ng recalled that the Nigerian government said it would soon start making payments to citizens employed from 774 local government areas of the country under the SWP.

The SPW is an ad hoc programme meant to provide public works for 477,000 artisans from the 477 council areas in the country for three months.

The minister of state for labour, Festus Keyamo disclosed in a tweet on Saturday, March 20, that President Buhari has directed the release of the funds for the payment of stipends to the beneficiaries of the programme.

Keyamo further stated that he has asked the National Directorate Of Employment (NDE) to start crediting the accounts of those listed in the scheme.