It is indeed a moment of joy and satisfaction for top Nigerian actor, Mike Ezuruonye, who has just scored another major achievement to his name.

In a recent Instagram post, the actor announced to his fans and well-wishers that he was honoured with a doctoral degree in arts and literature from the Estam University in Benin Republic. Ezuruonye in one video post was spotted posing with his honorary certificate. The film star also teasingly urged his followers to welcome the latest doctor in town.

“It’s cause of you my fans, supporters and good people this happened.. Dr Michael Ezuruonye loves you all.”

Check out the posts shared by the actor below:

As expected, the good news shared by the Nollywood star elicited mixed reactions from his followers and colleagues on the social media platform.

Many extended congratulatory messages to the new doctoral candidate. Read what they had to say below:

“Congratulations on your honours.” 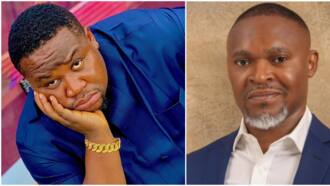 All sugar daddies fall back to base: Cubana Chiefpriest reacts to death of Super TV CEO

Some weeks ago, Legit.ng reported that Ezuruonye showed how he felt about veteran actress Ngozi Ezeonu.

The actor described Ngozi as a blessing to him and his colleagues in the entertainment industry as he posted a video showing the moment he hung out with her and other colleagues.

In the video, as music blared from the speaker, actress Ngozi was seated while Mike stood behind her with naira notes in his hands. As he danced to the music, he sprayed the veteran actress who seemed to be pleased as she was spotted smiling.