Interestingly, this happened to be the Nollywood actor’s first time on a private jet and he seemed quite excited by it.

In the video, Zubby was seen sitting across from Davido in the jet as they both hyped and hailed themselves for the camera. 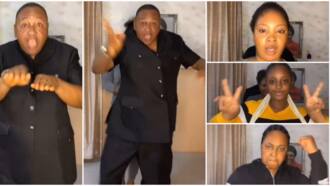 The movie star was seen referring to Davido as his biggest boss. The singer also called the actor his brother. See the video below:

In another short clip, the people on board the jet were seen continuing their banter. See the video:

Internet users and fans of both celebrities had things to say about Zubby’s first private jet trip. Read some comments below:

“God I’ll own mine one day. No come follow me talk rubbish. It’s a prayer but yes I’ll work towards it.”

“Must be really exciting. “

“Private jet that I entered to garki market yesterday, mtchew.”

The friendship between Davido and Zubby Micheal did not just start. Legit.ng earlier reported the Nollywood actor was seen doing bodyguard duties for the singer in Anambra.

In one of the videos, crowds gathered at both sides of Davido’s car as he tried to drive away from what looked like an event centre.

Some men in uniform were spotted trying to get the crowd out of the way and actor Zubby Michael was also seen doing his part.