Home / Blog / Entertainment / Actress Regina Daniels Calls Herself the Reigning Queen As She Explains Meaning of Her Name, Fans React

Actress Regina Daniels Calls Herself the Reigning Queen As She Explains Meaning of Her Name, Fans React Actress Regina Daniels Calls Herself the Reigning Queen As She Explains Meaning of Her Name, Fans React


Popular Nigerian actress and billionaire wife, Regina Daniels, has now told fans the meaning of her name on social media.

Taking to her Instagram page, the movie star posted a video of herself and explained that she was going to be introducing herself with the meaning of her name.

Not stopping there, the pretty mother of one revealed to fans that she is the reigning queen. 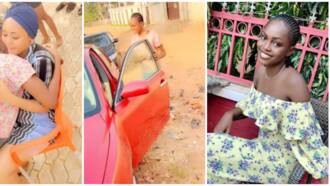 Many social media users gushed over Regina Daniels’ post. Read some of what they had to say below:

Regina Daniels and her billionaire husband, Ned Nwoko, have no doubt been intentional about making their son, Munir, a well-rounded baby boy.

Just recently, in a video making the rounds online, the little boy was seen engaging in a sporting activity with his dad as they had a tennis training session.

In the clip, Ned was seen throwing a tennis ball at his son and the young Munir caught it with his bat. The one-year-old was also presented with another ball from an onlooker and he impressively hit it with his bat.

Also in the clip, Ned and Munir were seen running around the tennis court in their sports wears.

In the video posted on Munir’s official Instagram page, the one-year-old was seen swimming alone inside a massive pool in their home.

In the impressive short clip, Munir looked at his billionaire father, Ned, for instructions as he tried to mimic his moves inside the body of water.