Nigeria international Victor Osimhen maintains his top scoring form for Napoli after scoring his eighth goal of the season.

The in-form 22-year-old attacker scored the only goal that The Parthenopeans needed to beat stubborn Torino at the Diego Armando Maradona Stadium on Sunday, October 17.

Having toiled for 80 minutes, the Super Eagles forward jumped over the defenders to break the deadlock in the 81st minute as Luciano Spalletti’s men stretch their Serie A winning run to eight games as reported by Football Italia. 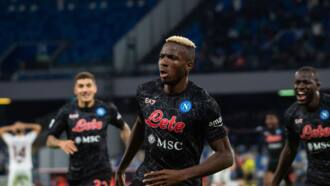 Meanwhile, the former youth international has also increased his tally to five goals and one assist in seven Serie A games so far.

While his tally so far this campaign stands at eight goals and one assist in nine appearances across competitions.

Osimhen moved to Italy from French League side Lille in a club record fee last year and he has shown the quality he is made of with several legends backing the Nigerian to succeed.

The goal poacher is among the favourites to win the Italian League golden boot this season baring any unforeseen circumstances.

About a week ago, the Napoli forward was among the goal scorers as Nigeria defeated Central African Republic in their World Cup qualifier in Douala.

What is the worth of Victor Osimhen? 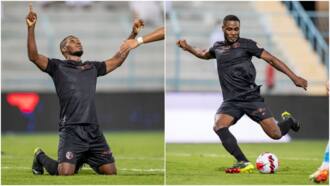 Legit.ng earlier reported that Victor Osimhen has been on fire since the start of the season having scored seven goals and one assist in eight appearances for Napoli so far this campaign.

His performances have now seen his value rise to the tunes of about €10 million on the transfer market lately.

The 22-year-old former Lille attacker has now equalled his Wilfred Ndidi’s €60 million market valuation according to latest report on Transfermarkt.