– Many Nigerians have express dissatisfaction with the ban on the social media company, highlighting the benefits of the microblogging site

Nigeria’s first lady, Aisha Buhari, has reacted to the suspension of Twitter’s operations in the country.

She made the announcement via a tweet that has now been deleted. However, shortly before she deactivated the account, First Lady showed her support for the unity of the country by saying long-life Nigeria. 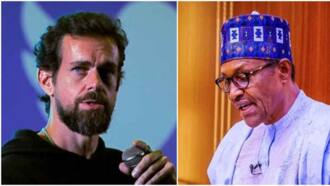 Twitter reacts to FG’s ban, discloses next action in Nigeria

”I will be deactivating my Twitter account for now. Long live Federal Republic of Nigeria Flag of Nigeria.”

Meanwhile, the microblogging site, Twitter, has reacted to the federal government’s decision to suspend its operations in Nigeria.

In a related report, following the indefinite suspension of Twitter in Nigerian, the federal government has explained the reasons why the operations of the microblogging site were put on hold.

The minister of information and culture, Alhaji Lai Mohammed, in a statement on Friday, June 4, in Abuja suggested that Twitter was suspended in the interest of Nigeria.

The ban on Twitter in Nigeria comes just days after the federal government criticised the social media giant for deleting a tweet by President Muhammadu Buhari that warned of strong actions against secessionists.