Dutch Eredivisie Champions Ajax decided to honour their fans in quite a remarkable way as the club melted its trophy to give back to fans in the form of tiny stars.

The trophy was molten to 42000 silver stars which the club announced would be given to season ticket holders.

Ajax, like many other clubs in Europe, have had to play a large chunk of their campaign in empty stadiums because of the COVID-19 threat.

And what better way to show the fans that they still matter than to share with them the trophy? 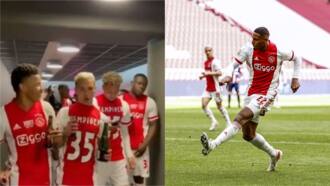 Taking to social media on Wednesday, May 12, the club shared a warm video of the trophy undergoing the process of developing the tiny stars.

In the video, Ajax director of football Marc Overmars is seen carrying the trophy for melting.

The video also features Ajax captain Dusan Tadic, who gives a nod of approval for the trophy to be melted, while 18-year-old Ryan Gravenberch also makes a brief appearance.

Club director Edwin van der Sar, who is also featured in the video, discussed the gesture where he admitted it was the least the club could do since they have felt the fans’ support “every week”.

“Previously, when we said ‘this title is for you’, we were expressing how we were doing it for the fans however sharing the trophy is the ultimate proof that we really are.’ After a turbulent year, we are ensuring our fans feel part of our championship.” Van der sar said as per Ajax.nl:

Earlier, Legit.ng reported that players of Dutch giants Ajax have been spotted celebrating and dancing to the music of Nigerian super musician Burna Boy while walking into the dressing room after their win over FC Emmen.

Ajax players were in great form in their last game against Emmen as they recorded a 4-0 win over the visitors in which three of those goals were scored in the second half.

And after the win, the players were in good mood singing the song titled On the Low even though they were unable to get the lyrics correctly.