Uyo – The Akwa Ibom state government on Sunday, June 13 took delivery of two new aircraft – the Airbus A220 series – a new addition to the fleet of Ibom Air.

Ibom Air, a wholly-owned airline by the state government, now has seven aircraft in its fleet with its latest additions.

Sources in the aviation sector say the new aircraft are less than two years old. 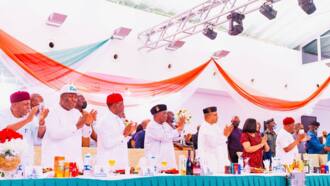 The two aircraft touched down at about 3 p.m. at the Victor Attah International Airport, Uyo, watched by a large crowd of Akwa Ibom residents and dignitaries..

Legit.ng gathered that this is the first time Ibom Air is having Airbus in its fleet as all the other aircraft in its fleet are Bombardier CRJ-900.

A statement sent to Legit.ng by the Akwa Ibom state governor quoted Governor Emmanuel as saying:

“Today marks a major milestone in the history of aviation development not only for Akwa Ibom state but in this country.

“Never in the history of this nation has a state established and owned a successful business airline. Never in the whole continent of Africa.”

Akwa Ibom government sources say ten new aircraft will be added to the fleet before 2023 to boost the vision of making Ibom Air, the most vibrant airline in the sub-region. Residents of the state flooded the comment section of the page to congratulate the governor and his team for a job well done.

Meanwhile, the Akwa Ibom state commissioner of special duties, Rt. Hon. Okpolupm Etteh has revealed that Governor Emmanuel is committed to the timely completion of work at the Maintenance, Repairs, and Overhaul (MRO) facility at the Victor Attah International Airport, Uyo.

The facility is expected to enhance the status of the airport as an internationally recognised gateway.

In a statement sent to Legit.ng, Rt. Hon. Etteh said Governor Emmanuel’s administration was fully aware of the strategic advantage it will accord the state and nation in the sub-Saharan aviation sector.

In a related development, the Akwa Ibom government has indicated its readiness to collaborate with the Republic of Trinidad and Tobago in the areas of aviation and tourism. 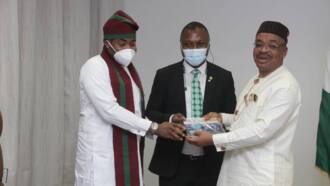 This was highlighted when Governor Emmanuel had discussions with the High Commissioner for the Republic of Trinidad and Tobago to Nigeria, Mr. Wendell Vincent Carlton De Landro, at Government House, Uyo.

Governor Emmanuel who expressed appreciation for the Republic of Trinidad and Tobago’s interest in the state’s budding aviation industry and other areas of economic venture, pointed out that his administration has repositioned the state for such collaboration.