Home / Blog / Entertainment / All The Way From South Africa, Thabo Mbeki Explains How He Worked Against Obasanjo ▷ Nigeria news

All The Way From South Africa, Thabo Mbeki Explains How He Worked Against Obasanjo ▷ Nigeria news All The Way From South Africa, Thabo Mbeki Explains How He Worked Against Obasanjo ▷ Nigeria news


A former South African president, Thabo Mbeki, has narrated how he ensured that ex-president Olusegun Obasanjo did not achieve his third term presidential ambition in Nigeria.

The 79-years-old former leader said he worked with one of Nigeria’s ex-military heads of state, Abdulsalami Abubakar, against Obasanjo’s ambition.

The Cable reports that Mbeki while speaking virtually at the Abdulsalami Alhaji Abubakar Festschrift Conference which was held in Abuja said he had called Obasanjo to discuss the matter with him. 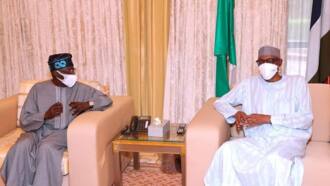 Discussions on amendment of bill in favour of Obasanjo

Mbeki said that after his discussion on the matter with Obasanjo, he also called Abubakar over the issue and they both agreed that the proposed amendment of the bill in favour of the ex-president was undesirable.

Daily Trust also reports that Mbeki said that as of the time he was making all these moves, the Nigerian parliament had begun plans to draft an amendment of the bill to allow presidents to run for office for a third term.

The South African leader said he had shared the view with Abubakar that the bill must be avoided at all cost.

“We were of one mind that it spells bad both for Nigeria and the rest of the continent, tampering with and compromising our democratic system, which is just a few years old.” 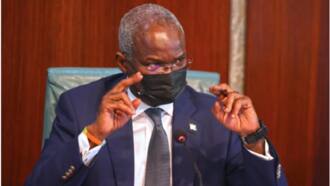 2023: Why I don’t envy those aspiring to become president – Buhari’s minister

“We agreed to add our voices to those kicking against the amendment. We agreed that Abdulsalam would follow the situation in Nigeria closely and indicate to me when we should intervene against the constitutional amendment.”

“I was very pleased when he called that the Nigerian senate has voted against the amendment.”

Meanwhile, Legit.ng previously reported that a former lawmaker and the president of Senate between 2005 and 2007, had said that Obasanjo’s ambition for a third term denied him a seat at the Senate for a second time.

Nnamani said he strategically sacrificed his position for re-election into the National Assembly to achieve this.

Also, a former governor and the current minister of the Ministry of Niger Delta affairs had noted that Obasanjo’s third term ambition almost led to the end of his political career.

Godswill Akpabio said he almost quit his campaign ahead of the elections over huge promises made to serving governors at the time.