Barrister Osuagwu Ugochukwu, who stands as the legal adviser to Ambassador Tukur Yusufu Buratai has debunked allegations linking his client to N1.85 billion arms money allegedly found in his house.

Ugochukwu made this known via a statement made available to Legit.ng on Friday, June 24.

As contained in the statement, Ugochukwu described the media report as a “false, concocted and malicious” report.

It will be recalled that an online newspaper, Sahara Reporters published a news report titled “EXCLUSIVE: Anti-graft Agency, ICPC Uncovers Billions In Cash Meant For Arms, Ammunition To Fight Boko Haram In Abuja Home Of Ex-Chief Of Army Staff, Buratai” on Thursday, June 23. 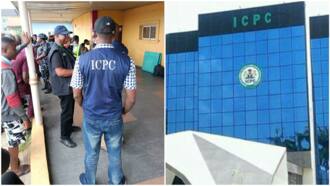 According to the report, the Independent Corrupt Practices and Other Related Offences Commission (ICPC) recovered N1.85 billion from a house and office said to belong to former Chief of Army Staff, Tukur Buratai.

Reacting to this allegation, Barrister Ugochukwu stated that the administration of President Muhammadu Buhari had about April 5, 2018, approved the purchase of equipment worth $1bn for the military through the Ministry of Defence.

According to him, it should be put on record that no such amount N850M or any similar sum, was found with Ambassador Buratai nor does he have any aide bearing such name as mentioned in the report.

He added that “Ambassador Buratai has no office or house in Wuse, Abuja (address not supplied by SR), nor does he have any bulletproof cars, BMW, G-Wagon (Particulars of the vehicle not also supplied by SR) worth N450m and neither is ICPC investigating any of such allegations.

“We view this as an orchestrated act aimed at tarnishing the image of LT General T.Y Buratai and we shall take all legal steps to hold the publishers accountable for such grievous character assassination on the image of LT.T.Y Buratai(RTD).”

Meanwhile, the ICPC has denied recovering N1.85 billion from a house and office said to belong to former Chief of Army Staff, Tukur Buratai.

In a statement issued on Friday, June 3, the commission said it recovered N170 million cash, $220,965, G-Wagon and other items from a military contractor.

The commission added that it has arrested the managing director of the company belonging to the military contractor, adding that investigation is ongoing.

In another report, the ICPC has said it would track and monitor constituency projects across 18 states of the federation.

This disclosure was made by Azuka Ogugua, the spokesperson of the anti-graft agency on Friday, May 6 in Abuja the nation’s capital.

According to the ICPC, states whose constituency projects are to be tracked include, Benue, Nasarawa, Plateau, Borno, Yobe, Taraba, Kaduna, Kebbi, and Kano states.