– Some Nigerians had accused Pantami of being sympathetic to extremists

The Northern States Governors’ Forum (NSGF) has distanced itself from the debate surrounding the alleged past comments made by Dr Isa Pantami.

According to AIT news, the forum stated that it is not responsible for the personal views expressed by the minister of communication technology and the digital economy.

The governors in a statement noted that the minister has provided his response to the issue which does not need validation or denial from them.

The forum claimed it had uncovered a plot by a group to spear the governors from the region by promoting the idea that they are supporting the minister’s past comments. 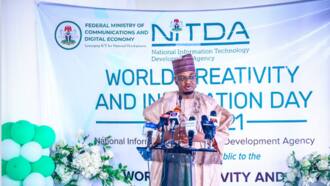 Alleged extremism: Isa Pantami opens up about forces against him

The body urged members of the public to be wary of social media posts aimed at tarnishing the image of its members.

Meanwhile, Isa Pantami has alleged that forces have a well-coordinated and richly funded campaign against him.

Pantami in a statement on Monday, April 26, by his spokesperson, Uwa Suleiman, said there is a plot by some unnamed persons to release doctored videos against him.

According to Daily Trust, the minister’s aide claimed the plot involves falsifying videos in a way that purports to show Pantami in an allegedly compromising position.

In another news, a group, Forum of Christian Bishops and Clergy Council, on Tuesday, April 27 held a solidarity rally in support of the minister of communications and digital economy, Dr. Isa Pantami, in Abuja.

The group also threw its weight behind President Muhammadu Buhari on his stance on the allegations against the minister.

The Forum said those behind the allegations were cabals affected by reforms championed by the minister in the Nigerian telecoms and ICT sector.

Meanwhile, the refusal of the embattled minister of communication and digital economy, Dr Isa Pantami to resign has been condemned by a social critic, Dayo Williams.

Williams who spoke with Legit.ng argued that if the minister happened to be an American or European, he would have resigned immediately without anyone asking him to do such.

According to Williams, when things like this occur in western country, such a person would apologise before tendering his resignation.