Ortom said the amendments to the Electoral Act will encourage transparency in the electoral process and lead to the emergence of true representatives of the people.

A statement released by the chief press secretary to the governor, Nathaniel Ikyur, said Ortom made the commendation while addressing journalists in Mbatiav, Gboko area of Benue state.

As seen by Legit.ng, the statement said the governor is excited that the president has headed to the call of many Nigerians to sign the amended Electoral Act.

According to Ikyur, Governor Ortom noted that the action of the president will bring about a transparent, free, fair and credible election in Nigeria.

Ortom added that the passing of the Amended Bill into law by President Buhari is the beginning of the good things set to happen in Nigeria.

The governor said that the President did well by rejecting Section 84(12) of the amended Electoral Act, saying the action is democratic and should be commended.

“The President did well by indicating that Section 84(12) should be deleted or amended to ensure that we do not cause unnecessary hardship to those in government who want to participate in the electoral process of our country.

“That is a welcome development because the President did not arbitrarily delete or reject it but decided to send it back to the National Assembly for action.”

For Ortom, the passage of the bill into law is democratic as the ball is now in the court of lawmakers of the National Assembly.

“I am sure our representatives will look at it in consultation with us and if they feel it should be deleted, that will be done. So it’s a welcome development.”

Speaking on the electronic transmission of results as provided by the amended Act, Ortom said this would bring an end to rigging at the polls.

Further advising the president to always listen to the voice of reason from Nigerians, Governor Ortom said such would go a long way in building trust between the government and citizens.

“It shows that we have said bye-bye to rigging because it has been a very big challenge where you campaign rigorously and win an election and then somebody sits somewhere and writes figures that are not real. 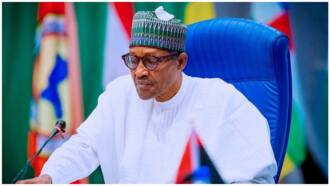 “But with the electronic transmission to Abuja, it will go a long way in curtailing changing of results and by so doing we will have true representatives and things will work out well for our country Nigeria.”

Legit.ng earlier reported that Ikyur had said that his principal does not have an atom of hatred for President Buhari

According to Ikyur, contrary to the belief that the Benue state governor hates the president, Ortom urges everyone to ensure they pray for President Buhari as the leader of the country.

He said the governor has been vocal against the leadership style of the president because he can not stand the atrocities committed by herdsmen in Benue state.

I have written my will, several attempts have been made to assassinate me, Nigerian governor cries out

Governor Ortom had made some very bold statements regarding the spate of insecurity in Benue and Nigeria at large.

The Benue state governor said he cannot be intimidated by anyone even though several attempts have been made to eliminate him.

In preparation for the worse, Governor Ortom said he has prepared his will and expressed confidence that his family would be fine.