A two-time governor of Nasarawa state and a chairmanship aspirant of the All Progressives Congress, Abdullahi Adamu, has said that he has never lost an election in his lifetime.

Adamu while speaking during a meeting with members of the APC caucus of the House of Representatives said he joined politics in the 70s and has never lost an election.

Daily Trust reports that the APC chieftain who is also a sitting senator has the complete backing of President Muhammadu Buhari for the position of the party’s national chairman.

Continuing, Adamu said his declaration of his intent to vie for the national chairmanship position of the party was due to his efforts in reconciling members of the APC across Nigeria.

Stating that he was the last man to join the chairmanship race, Adamu said that he has what it takes to lead members of the APC across boards.

According to him, his zeal and experience to address the challenges facing the APC at the moment are what the party needs.

In his reaction, the House leader, Alhassan Ado Doguwa, who welcomed Adamu commended the lawmaker for his efforts to ensure that the party stands strong.

The Punch reports that Doguwa also described Adamu as a seasoned politician who has the required clout needed to lead members of the APC.

The ruling All Progressives Congress has begun the sale of nomination forms for the national chairmanship position.

The nomination form would sell for N20 million while other positions in the National Working Committee (NWC) would cost N5 million each.

The sale of nomination forms reportedly began on Monday, March 14, and will end on Friday, March 18. 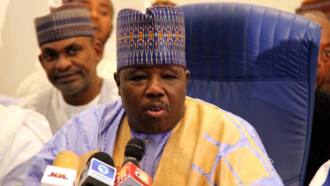 APC: Ali Modu Sherrif speaks on his endorsement of chairmanship candidate ahead of party’s convention

Earlier, Legit.ng reported that a former governor of Borno state, Ali Modu Sherrif, had denied claims that he endorsed Senator George Akume for the position of APC’s national chairman.

Sherrif in a statement released on Tuesday, March 15, said the report that he has endorsed Senator Akume ahead of the APC’s national convention as a worthy chairmanship candidate of the party is fake.

The statement which was signed by the deputy campaign chairman of the Senator Ali Modu Sherrif Campaign Organisation, Cairo Ojougboh, said the former Borno governor is still consulting following recent developments within the APC.