– The attack on Governor Ortom has been condemned by opposition PDP

– According to the party, the attempt on Ortom life is an invitation to anachy

The forum charged the federal government to secure the lives and human rights of all Nigerians regardless of political leanings.

In a statement released on Sunday, the forum warned that no group of individuals should be brazen enough to take laws into their own hands.

The statement was signed by Aminu Waziri Tambuwal, chairman of the forum and Sokoto state governor.

The statement reads: “The PDP-Governors Forum has received with shock the assassination attempt on the Governor of Benue State, H.E. Dr Samuel Ortom.

“We wish therefore to warn that any attempt to harm any Nigerian will be viewed by the Forum as an attempt on all of us.

Benue: Fish out sponsors of attack on Ortom, northern governors to security agencies

“We believe strongly that any dispute or perceived dispute should be and must be resolved amicably without resort to violence. Nigeria is not a Babana Republic, even though certain retrogressive elements and centrifugal forces are trying to consign Nigeria into a failed state.

“It remains the primary responsibility of the government, especially the Federal government, who have a monopoly of the coercive forces of state, to secure the lives and livelihoods of our people, however low or high. Every Nigerian deserves equal protection of the laws. Every citizen is entitled to freedom of speech and free exercise of all rights guaranteed in the Constitution of the Federal Republic of Nigeria, subject only to law.

“Nigeria is still a democracy and a nation of laws and not men. Nobody, or group however highly placed should take the laws into their hands, even though some highly placed Federal government ministers seem to have surrendered to the nefarious activities of miscreants and mischief makers, bent on destabilising the nation. Self help is an invitation to anarchy and must be nipped in the bud. 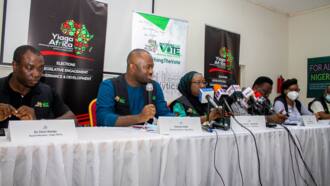 Recall that Legit.ng had reorted that Ortom on Sunday, March 21, visited the Redeemed Christian Church of God(RCCG) Signs and Wonders Mega Parish in Makurdi to thank God for sparing his life.

This is coming a day after Ortom’s convoy was attacked by some armed criminals close to his farmland along the Makurdi-Gboko highway.

There was a heavy exchange of gunfire between the attackers and the governor’s security officials.

Earlier, Legit.ng reported that Ortom recounted the near-death attack from gunmen along the Makurdi/Gboko road in the Makurdi local government area of the state.

Ortom said the assailants who attacked the convoy close to his farmland were about 15 in number with the chief aim to kill him.

The governor went on to note that things could have been worse if not for the swift intervention of his security detail.

Aanu Adegun is a politics and current affairs content editor at Legit.ng with over 7 years of experience in both digital and traditional media. A graduate of English Studies from Adekunle Ajasin University, Akungba Akoko, Ondo state, Aanu started his journalism career as a features writer. Aanu, who is also a creative writer has written books and children magazines. He once anchored some specialised pages of a national newspaper. Aanu is also a satirist