The sixth season of the Big Brother Naija (BBNaija) season ended a few weeks ago with Whitemoney emerging as the winner of the show and Liquorose as a finalist.

While some people tagged the Shine Ya Eyes edition as entertaining, quite a lot of people do not share this sentiment.

During the airing of the show, a lot of people thought it boring and not as entertaining as the previous seasons.

For some viewers, the housemates lacked content and were too conscious of the cameras in the house.

Following this, Legit.ng decided to carry out a poll to find out from readers what edition of the show was the best.

The majority of readers chose Lockdown and Pepper Dem seasons as the editions they found the most exciting. Check out comments below:

“Lockdown is the best for me because of OZO and Nengi.”

“Lockdown!!!!!!! So much fun and very dramatic..I don’t remember being bored throughout the season. As for SYE I’m gonna miss Cross “

“Forget the main BBN seasons…The best so far is #LOCKDOWN_REUNION. The Wrestlers showed their talents…the talent they were restricted from showing in the house No disqualification…Even Ebuka shoes can attest to this”

“Lockdown season 5 I learnt a lot while they were In the house and the drama there was something else,if you’re doubting ask Ebuka”

“Double wahala season 3 is one of my favorite BBNaija show because Ceec and Alex entertainment, pepper Dem gang season 4 because of Tacha love towards all the housemates and I love her entertainment too. and Lockdown season 5. Because Erica and Kiddwaya, Nengi and OZo relationships.” 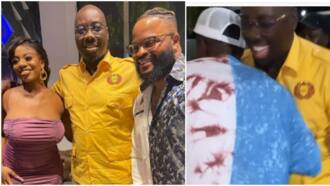 “Shine yh eyes and because of liquorose and Emmanuel so far the are my best favorite I don’t mind watching big brother over and over for dat two.”

“Lockdown was and remains my best. Our Prince, Praise, Erica & Lucy made Saturday night parties interesting. Can’t forget their dancing steps. The vibe was so so much.”

“Season 4 (pepper them) was the best for me because Tacha & Mercy gave us the highlight of that season.”

BBNaija Shine Ya Eye star, Saskay, was in a love triangle with two of her co-stars, Cross and Jaypaul, and she has now given fans an update on that situation.

Taking to her Instagram stories, Saskay noted that she was tired of addressing questions on her feelings for both men.

According to the reality star, Cross and Jaypaul are both friends to her and there is no sort of bad blood between them.