Bobrisky Surprises Father with a Lexus SUV on His Birthday in Trending Photos, Video ▷ Nigeria news Bobrisky Surprises Father with a Lexus SUV on His Birthday in Trending Photos, Video ▷ Nigeria news

Popular Nigerian crossdresser and African male barbie, Bobrisky, made his father a proud owner of a new Lexus SUV after he surprised him with the car for his birthday.

Taking to his Instagram page, he shared a series of photos of the car and then one with his dad posing with a money cake and the car.

Sharing the photos, he wrote:

“Happy birthday daddy, may you live long for me. I can’t wait to continue spoiling you ❤️”

Photos and a video of Bobrisky with his father at their home have since surfaced online – and it has got social media users talking.

In the video, the crossdresser who is known for his loud makeup and extravagant hair and nails, was seen without any of it.

Dressed in a black jalabia, a black head-warmer, and a black mask, he looked as plain as he did during his father’s birthday in 2020.

See some comments below:

“I applaud her for always taking care of him.”

“Some Parents of these days don dey break rules o…. No body cares about their children lifestyles again… Na money everybody just want …. Nothing like “I am not accepting any gift from you until you change your bad ways again””

“When she goes home he resets to factory settings.”

“Bobrisky will always dress like a man when going to met his dad.”

“I like the way Bob dresses to see the dad, he shows so much respect even if e know say e dey F, he has respect and puts family above all.”

Meanwhile, it has indeed been a trying period for Bobrisky, who recently went through a surgical procedure to alter his body.

In a recent post shared on his official Instagram page, Bobrisky extended his sincere gratitude and appreciation to everyone who has been supportive of his journey so far. He also thanked them for checking on his wellbeing. 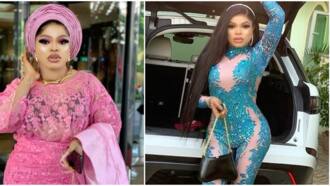 Bobrisky excitedly says he can’t wait to share photos of his new body online, assures fans of his recovery

The effeminate celebrity assured his social media fans that his body is healing great and he can’t wait to share pictures on his page.