Zamfara – Dauda Lawan Dare has emerged as the gubernatorial candidate of the Peoples Democratic Party (PDP) in Zamfara.

Dare was declared the winner of a fresh primary election conducted on Friday, September 23, after he polled 422 votes to floor other aspirants.

The election was in line with directives of the Federal High Court which had voided Dare’s first victory, Nigerian Tribune reports.

The candidate’s rivals, Hon Ibrahim Shehu Bakauye Gusau and Hafiz Mohammed got only one vote each, while Wadatau Madawaki withdrew from the contest.

the secretary of the electoral committee who conducted the election, Alhaji Abubakar Sadiq said:

“Having scored the highest votes of 422, I hereby declare Dr Dauda Lawan Dare as the PDP gubernatorial candidate for 2023 general elections.

“The other contestants, Ibrahim Shehu and Hafiz Mohammed got one vote each, while there were also four invalid votes.”

Sadiq expressed gratitude to all whose contributions during the exercise made it a success.

Before this, supporters of Hon. Gusau had made an allegation against Abdulaziz Sani Lawal Dare, a brother to Dare. 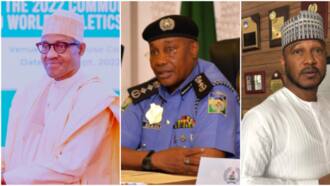 In a petition against the Independent National Electoral Commission (INEC) forwarded to President Muhammadu Buhari and the IGP Alkali Baba Usman, the leader of Gusau’s supporters, Nasir Ahmed, claimed that Abdulaziz, a legal officer at INEC headquarters in Abuja, had been working with someone in the commission to favour his brother.

Ahmed, in the petition made available to Legit.ng, alleged that Abdulaziz is conniving and compromising the credibility, justice, and fairness enshrined in the electoral law and the Nigerian constitution while discharging his official responsibility at INEC’s legal department in Abuja.