Buhari Sallau, the personal assistant on broadcast media to President Buhari, disclosed this via a Facebook post on Wednesday, October 13.

According to him, the president received the APC caretaker committee chairman, Governor Mai Mala Buni, and Okeke at the State House Wednesday. 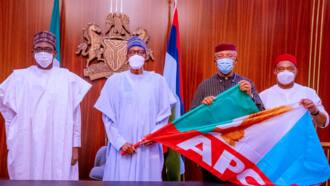 The governor of Imo state, Hope Uzodimma, was also present as the president presented the APC flag to the new member.

According to Channels TV, Governor Uzodimma briefed State House correspondents at the end of the meeting.

The Imo state governor was reported as saying he is confident that there will be more defections to the ruling party before the November 6 governorship election.

Uzodimma faulted the claim reportedly made by Governor Willi Obiano of Anambra that members of the State House of Assembly who recently left APGA for the APC were financially induced to join the ruling party.

He stressed that rather than enticing the lawmakers with money, they were lobbied through persuasion and counselling. 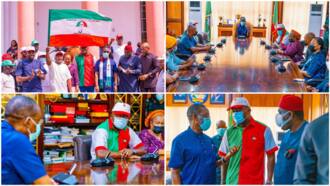 The governor’s media aide, Mamman Mohammed, said the new APC members include five serving and four former House of Representatives members as well as two members of the Anambra state House of Assembly.

In a statement posted on his Facebook page, Mohammed said Governor Buni congratulated the new members saying they made the right decision by joining the ruling party and bringing their people to the national movement.