– Edo APC governorship candidate in the 2020 poll, Ize-Iyamu, and his running mate have emerged victorious in a suit seeking to nullify their candidacy

– However, the Court of Appeal in the south-south state has set aside the judgement of the lower court

The Court of Appeal in Benin has ruled in favour of the governorship candidate of the All Progressives Congress (APC) in the September 19, 2020 election in Edo state, Pastor Osagie Ize-Iyamu, and his running mate, Alhaji Gani Audu.

The Nation reported that the appeal court on Monday, March 8, set aside the judgment of the Edo state high court which disqualified the duo from participating in the governorship election. 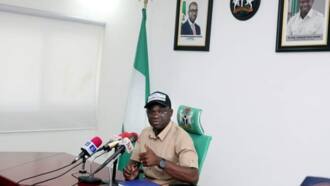 Godfatherism? Edo deputy governor highlights why he fought against Oshiomhole

Legit.ng gathers that the three-member panel of the appellate court unanimously declared that there was no evidence to back up the allegation of credentials’ forgery against Audu. The Court of Appeal in Benin has set aside the high court judgement which disqualified Ize-Iyamu as APC’s governorship candidate in the 2020 election in Edo state.
Photo credit: @PastorIzeIyamu
Source: Twitter

The judges also declared that the suit was statute-barred since it was filed outside the 14-day constitutional threshold.

The court, therefore, upheld the appeal of Ize-Iyamu and Audu and set aside the judgment of the lower court.

Meanwhile, Governor Godwin Obaseki of Edo state and his predecessor, Adams Oshiomhole, have met for the first time since the Edo state governorship election.

Both politicians met on Saturday, March 6, and exchanged warm greetings at an event in Auchi.

The Edo state governor said he holds no personal grudges against Oshiomhole.

In another related report, Philip Shaibu, the deputy governor of Edo state, on Sunday, March 7, said he was brutalised in a bid to end godfatherism and ensure Oshiomhole successfully completed his two terms in office. Shaibu made the disclosure at the reception for the outgoing local government chairmen at St. Paul Catholic Church, Benin.

Justifying his loyalty to Governor Obaseki, the deputy governor accused Oshiomhole of plotting to transform to godfather and derail the state government’s plans.