– The appointments were contained in a statement issued by the director of public affairs, ministry of aviation, James Odaudu, on Monday, March 15

– Professor Bako Mansur Matazu is now the director-general of NIMET

President Muhammadu Buhari on Monday, March 15, reorganised the agencies under the ministry of aviation.

The Nation reports that the president announced the appointment of Professor Bako Mansur Matazu as new the director-general of the Nigeria Meteorological Agency (NIMET).

The president also approved the reappointment of Engr. Akin Olateru as the commissioner and chief executive officer of the Accident Investigation Bureau, Nigeria (AIB). 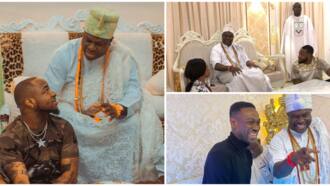 The appointments, according to a statement made available to newsmen in Abuja by the director of public affairs, ministry of aviation, James Odaudu, are in line with the administration’s commitment to the implementation of the aviation development roadmap.

According to him, Matazu was, until his appointment, the general manager, Meteorological Research in the Agency.

“Captain Modibbo had served in various capacities, including Pilot in Training, Fleet Captain at Dornier Aviation Nigeria, Max Air and other organisations and has clocked about 6000 hours of flying career.” He said the new chief executive officer of AIB is an Aircraft maintenance engineer with Nigerian, UK and USA licenses, adding that he began his career in engineering maintenance with Pan African Airlines and the Nigerian Police Air Wing after which he left Nigeria for further studies abroad.

“He has also worked with multiple airlines in Europe including KLM, Martin Air in Holland, British Aerospace Engineering and British Midland Airways.

“He attended City University, London and graduated with an M.Sc. in Air Transport Management with specializations in research and simulations into accident investigations.”

He also stated that the appointments are with immediate effect, adding that the reorganisation is a continuous exercise that will involve other management staff of all agencies of the ministry.

Meanwhile, Legit.ng had previously reported that President Buhari asked the Senate to confirm the nomination of Ahmad Shaba Halilu as the substantive director-general of the National Space Research and Development Agency (NASRDA).

It was reported that Garba Shehu, a presidential aide, in a statement on Tuesday, March 9, disclosed that Buhari’s request was contained in a letter to the president of the Senate, Ahmad Ibrahim Lawan.