BREAKING: Defence Headquarters Speaks on Cause of Plane Crash that Killed COAS, others ▷ Nigeria news BREAKING: Defence Headquarters Speaks on Cause of Plane Crash that Killed COAS, others ▷ Nigeria news

– Meanwhile, DHQ has disclosed that inclement weather was part of the causes of the tragedy

– DHQ’s spokesman, Onyema Nwachukwu, revealed this on Friday, May 21

The Nigerian Defence Headquarters has opened up on the cause of the plane crash that resulted in the death of Chief of Army Staff (COAS) Ibrahim Attahiru and 10 other officers on Friday, May 21.

According to Onyema Nwachukwu, defence spokesman, although the incident is still being investigated, the crash occurred after the aircraft landed at the Kaduna International Airport.

However, Nwachukwu via the DHQ’s verified Twitter page disclosed that General Lucky Irabor, the Chief of Defence Staff (CDS) has directed that an Accident Investigation Board be constituted to ascertain remote and immediate causes of the tragedy. 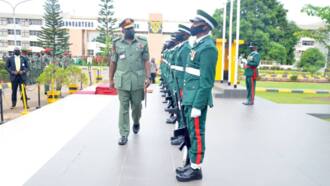 Breaking: APC in shock as Chief Of Army Staff Dies In Plane Crash

“The unfortunate incident occurred after landing at the Kaduna International Airport due to inclement weather. The Chief of Defence Staff (CDS) General Lucky Irabor has therefore directed that an Accident Investigation Board be constituted to unravel the immediate and remote cause(s) of the unfortunate accident.”

Earlier, the Nigerian Army had confirmed the death of Attahiru in the military plane crash in Kaduna on Friday evening, May 21.

A statement posted on the official Twitter page of the Nigerian Army has also confirmed the tragic development. Legit.ng gathered that 10 others, including the crew, also died alongside the COAS.

Already, the Nigerian Air Force, in a statement had confirmed that there was an accident involving one of its aircraft in Kaduna but did not go into details.

Tragedy: The last assignment General Attahiru was going for before he died in plane crash

Naturally, Nigerians reacted to the news of his death.

“Ibrahim Attahiru was a fine officer & brilliant gentleman. When we last saw barely 48 hrs ago, he reminded me of all the attributes why most of his officers & men saw his tenure as #COAS of @HQNigerianArmy as hopeful. This is tragic!”

“My sincere condolences to the @NigAirForce @HQNigerianArmy and all our security agencies. Also to the families and loved ones of COAS Major General Ibrahim Attahiru and every other passenger on board the ill-fated flight. May their gentle souls rest in peace.”

“May the soul of the Chief of Army Staff (COAS), Lt. General Ibrahim Attahiru and others on board the ill-fated aircraft rest in peace. May God console their families, friends and colleagues. Amen.”