– Nigeria has lost its Chief of Army Staff

– The incident occurred on Friday, May 21 around 6pm Nigerian time

Though details are still sketchy as at the time of filing this report, a military source said that it happened in Kaduna on Friday, May 21, Daily Trust added.

Already, the Nigerian Air Force, in a statement has confirmed that there was an accident involving one of its aircraft in Kaduna but did not go into details.

Meanwhile, Nigerians have reacted to the news of his death.

“Ibrahim Attahiru was a fine officer & brilliant gentleman. When we last saw barely 48 hrs ago, he reminded me of all the attributes why most of his officers & men saw his tenure as #COAS of @HQNigerianArmy as hopeful. This is tragic!” 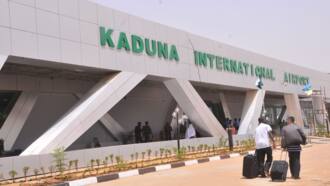 “My sincere condolences to the @NigAirForce @HQNigerianArmy and all our security agencies. Also to the families and loved ones of COAS Major General Ibrahim Attahiru and every other passenger on board the ill-fated flight. May their gentle souls rest in peace.”

“May the soul of the Chief of Army Staff (COAS), Lt. General Ibrahim Attahiru and others on board the ill-fated aircraft rest in peace. May God console their families, friends and colleagues. Amen.”

“Chief of Army Staff Attahiru Ibrahim, died with seven others in the Kaduna plane crash. Patrick Yakowa’s death is yet to be unraveled. In fact, no plane crash has ever been unraveled in Nigeria. So, was COAS actually probing the military spending under his predecessor, Buratai?”

Recall that Legit.ng had reported that a military plane is feared to have crashed in Kaduna state. According to the news medium, the training aircraft crashed at the Kaduna international airport’s runway

The incident was said to have occurred at about 6pm while it was raining heavily.