The Court of Justice of the Economic Community of West African States (ECOWAS) has issued an order restraining the President Muhammadu Buhari administration from prosecuting any Nigerian for using Twitter.

The court issued the order on Tuesday, June 22, following the suit filed against the government by Socio-Economic Rights and Accountability Project (SERAP) and 176 concerned Nigerians over the Twitter ban in the country.

The injunction read that it was:

”Restraining the government of President Muhammadu Buhari and its agents from unlawfully imposing sanctions or doing anything whatsoever to harass, intimidate, arrest or prosecute Twitter and/or any other social media service provider(s), media houses, radio and television broadcast stations, the Plaintiffs and other Nigerians who are Twitter users, pending the hearing and determination of this suit.” 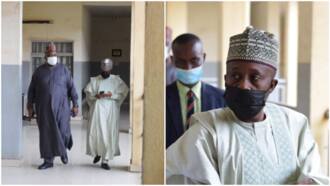 Premium Times reported that counsel for the plaintiffs, Femi Falana, hailed the court for issuing the injunction against the federal government.

“The intervention of the ECOWAS Court is a timely relief for millions of Nigerians using Twitter who have been threatened with prosecution under the provision of the Penal Code relating to sedition.”