– The governors on Tuesday, May 11, at a crucial meeting in Delta also called on the federal government to convoke a national dialogue

During a crucial decision in Asaba, Delta state capital on Tuesday, May 11, the forum of southern governors agreed to ban open grazing in the region.

This critical decision was announced by Governor Rotimi Akeredolu, the chairman of the forum, on behalf of his counterparts, The Cable reports.

Akeredolu said the resolution is part of the governors’ efforts to tackle the menace of insecurity that emanates from the unchecked activities of herdsmen.

Details of the meeting were released in a communique tweeted by the media group of Governor Ifeanyi Ugwuanyi.

“The meeting resolved that open grazing of cattle be banned across southern Nigeria.

“Development and population growth has put pressure on available land and increased the prospects of conflict between migrating herders and local populations in the south. Given this scenario, it becomes imperative to enforce the ban of open grazing in the south, including cattle movement to the south by foot.”

According to Punch, the forum also urged President Muhammadu Buhari to address Nigerians on the challenges of insecurity and restore the confidence of citizens.

“In view of widespread agitations among our various peoples for greater inclusiveness in existing governance arrangements, the federal government should convoke a national dialogue as a matter of urgency.”

Earlier, southern governors decided to meet to discuss issues affecting their areas. Based on this, they all converged in Asaba, the Delta state capital amid heavy security. 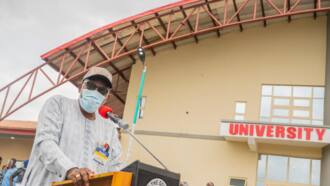 Security operatives were seen at strategic points in the capital to forestall any unforeseen occurrences.

The road leading to the Government House, the venue of the summit has been barricaded while security at the entrance gate has also been beefed up. The 17 governors in the southern part of the country under the aegis of the Southern Nigeria Governors Forum are expected to be at the meeting.