– Wednesday, March 17 is a black day in Tanzania as the death of the country’s president, John Magufuli, is dead

– According to the vice president, Magufuli died “from a heart illness”

John Magufuli, the president of Tanzania, has died at the age of 61. His death was announced on Wednesday, March 17, by the vice president, Samia Suluhu Hassan.

Bloomberg reported that Magufuli’s death came five months after he won a second term in a election.

Legit.ng notes that the late president attracted widespread criticism for his denial of the coronavirus pandemic.

“We have lost our courageous leader, President John Magufuli, who has died from a heart illness.” Reacting to the ugly incident, Akinwumi Adesina, the president of the African Development Bank Group (AfDB), said on Twitter:

“I am terribly saddened by the passing away of my very dear friend and brother, President John Magufuli of Tanzania.

“A very committed leader. He worked tirelessly for the development of Tanzania. I will greatly miss you and your drive and passion for Africa’s development. RIP”

Meanwhile, Legit.ng previously reported the death of Jacques Joachim Yhombi Opango, a former president of the Republic of Congo.

He had been ill before he contracted the deadly virus which has spread across the world like raging wildfire. Opango was an army officer who became the Republic of Congo’s first general and served as its head of state from 1977 to 1979. 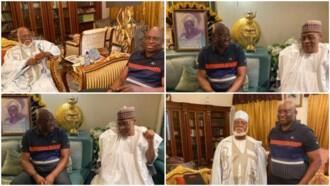 In another related report, a Nigerian politician, Junaid Mohammed, who served as the vice-presidential candidate of the Social Democratic Party (SDP) for the 2019 elections has died

Mohammed, a lawmaker in the second republic, died on Thursday Thursday night, February 18, at a COVID-19 isolation centre.

A family member who confirmed the incident however insisted that the politician was not positive for COVID-19.