The armed forces of Ukrainian have claimed that they shot down five Russian aircraft and a helicopter in the early hours of Thursday, February 24.

The disturbing report is coming on the heels of Russia’s attack on Ukraine, CNN reports.

According to a Defence spokesman of Ukraine, many Russian troops were possibly killed in the Thursday morning attack 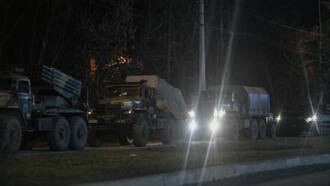 “Attacks on border units, border detachments, and checkpoints are carried out with the use of artillery, heavy equipment, and small arms. The work of enemy sabotage and reconnaissance groups is also recorded.”

It was gathered that at least seven “loud explosions” have been heard in Ukraine’s capital, Kyiv.

This is war of aggression, Ukraine’s foreign minister cries out

Meanwhile, foreign minister Dmytro Kuleba, has taken to Twitter to raise an alarm that Russia had launched a full-scale invasion of Ukraine and is targeting cities with weapons strikes.

“Putin has just launched a full-scale invasion of Ukraine. Peaceful Ukrainian cities are under strikes. This is a war of aggression.

“Ukraine will defend itself and will win. The world can and must stop Putin. The time to act is now.”

On his part, US President Joe Biden had condemned Russia’s “unprovoked and unjustified attack by Russian military forces”, according to CNN.

It was gathered that Biden’s statement released on Wednesday, February 23, followed explosions in Ukraine.

He said the US and its allies will “respond in a united and decisive way”.