This is undoubtedly the era of daring brides rocking jaw-dropping looks for their special day and we are totally here for it!

Currently trending on social media is a video of a bride looking elegant in a black George dress at her traditional wedding ceremony.

What started out as a stunning traditional bridal look left internet users with jaws hanging by the end of the video.

The IUF Couture dress, which transformed from an extra bride’s choice to a regular bride’s look, ended up as a sizzling playsuit by the time the bride was done taking off pieces of clothing. “Omo so na she get the body?!!! I was waiting for the hips to disappear with the cloth.”

“Truth oh, if she hadn’t stripped, I would have believed hip pad was added to the outfit. Nice.”

“Dis is definitely a master piece nd am rocking this soon, outfit choke any how.”

“This right here is the real deal. She went from bride to wedding guest then to after party things.”

Designer says it took 1 week to create the outfit

Legit.ng’s Kumashe Yaakugh reached out the the designer, IUF Couture, to find out more about the viral design. 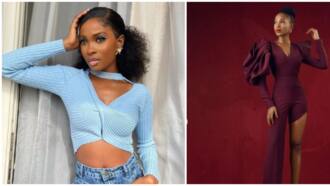 The bride got social media users buzzing with reactions and according to the designer, this was exactly what she wanted.

“She gave us the directive to make something that will make the media talk.”

Interestingly, such designs do not come cheap. IUF Couture revealed that the dress – which took them seven days to complete – would cost N230,000 to replicate using the same quality of fabric.

No bride should sleep on this: Fashion lovers share thoughts on designer’s yellow transformer dress

It goes without saying that Nigeria is one country blessed with a lot of talented people, especially in the fashion industry.

A while ago, IUF Coutureurrently received compliments on social media for what some have described as ‘fashion at its peak’.

In the video, she is seen posing in a stunning yellow dress with pearl embellishments around the sleeves and the skirt part, which later transforms into a different look