Burna Boy speaks on next album Burna Boy speaks on next album

Grammy award winning Afrobeat singer and rapper, Damini Ebunolouwa Ogulu, popularly known as Burna Boy has spoken on his next album and what fans should expect.

In a series of tweets made by self-acclaimed African Giant, he stated he wishes for people to capture the agony and struggle in his voice.

An agony that comes from constantly struggling to be great in an environment that has marked him out for subjucation.

The “Twice As Tall” hit-maker noted that he constantly suffers from masses whose hatred is borne out of things they actually lack understanding of.

Burna Boy in the course of exposition referred to self as an outsider.

Odogwu further added that despite the intensity of hatred the people bring on him, he has taken it all in and transformed it into something extraordinary.

Burna’s tweets read: “This next album. I need you to hear the pain in my voice, The pain of an OUTSIDER, Forever marked by my skin, my past and the place I come from No matter how skilled I am or how honourable I proved myself.” 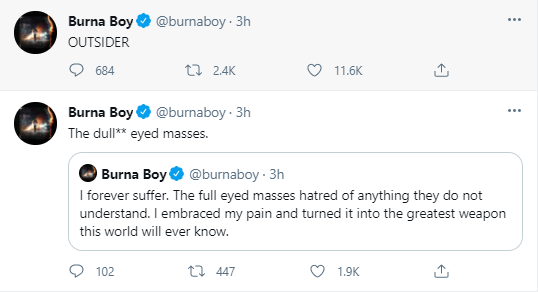 “I forever suffer. The full eyed masses hatred of anything they do not understand. I embraced my pain and turned it into the greatest weapon this world will ever know.”

With his tweets, the Afrobeat lord has indirectly given a hint on the name of his next album, “Outsider.”