The Peoples Democratic Party (PDP) has had the last laugh in Kano state over bye-election for Sabon Gari Constituency in the Kaduna state House of Assembly.

This follows its victory in the election as announced by the Independent National Electoral Commission (INEC), The Guardian reports.

The electoral umpire declared Alhaji Usman Baba of the PDP as the winner of the bye-election to the unhappiness of the ruling All Progressives Congress. 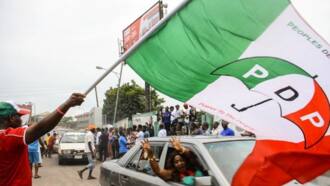 He defeated his closest contender, Malam Musa Musa of the All Progressives Congress (APC), who got 7, 404 votes.

The bye-election followed the declaration of the seat as vacant by the state House Assembly in April.

This was due to the failure of the lawmaker representing the constituency, Aminu Shagali to participate in legislative activities for more than 360 days.

In another report, Governor Nasir El-Rufai of Kaduna state disclosed on Friday, June 18, that he has sacked 99 political appointees. The governor made the disclosure at a media chat with some journalists, explaining that the disengaged political appointees constitute 30 per cent of the political officeholders.

Governor El-Rufai added that he started implementing its “rightsizing policy” by disengaging 99 political appointees but is yet to sack any state civil servant.

He explained that only agencies connected to the local government system have disengaged staff and these include the 23 local government councils, State Universal Basic Education Board (SUBEB) and the Primary Health Care Board.

The Nigeria Labour Congress (NLC) has warned that it may resume its suspended strike in Kaduna following an alleged breach of agreement by the state government.

The NLC president, Ayuba Wabba, gave the warning in a letter addressed to President Muhammadu Buhari on Friday, June 4, in Abuja.