Nigerian comedian, Zfancy was recently hosted in senator Dino Melaye’s home and unknown to the politician, he was about to be pranked.

In the video sighted online, the senator was seen addressing Zfancy and his friends, asking questions about what they do for a living.

All of a sudden, Zfancy who had taken a sip of the drink offered, held his stomach in pain and it soon progressed to cries of something happening with his intestine. 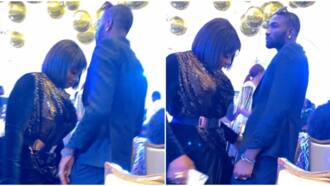 Why is he doing like robot with bad battery: Fans ask as Anita Joseph’s hubby dances sluggishly with actress

Dino the hard guy or not

Despite the drama unfolding before his eyes in his home, the politician was unmoved as he kept looking.

After a while, when it looked that Zfancy might be serious, Dino jumped on his feet, picked up his phone as if to make a call and told the comedian’s friends to carry him.

When Dino tried to make his way out of the room, the fear of being arrested made the boys confess that the politician had been pranked.

The politician eventually sat down with the boys when the drama ended.

“Dino wasn’t really moved, he seemed unbothered about everything.”

“You can’t move politicians like that. They are hard core. They have seen it all.” 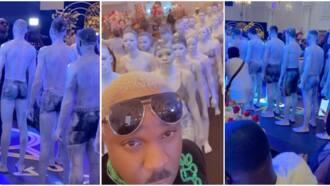 “He no funny at all sha, Dino wasn’t moved. Na luck you get if not na guard room u for sleep.”

“At first he was like are they serious or joking but he later became frightened.”

Bobrisky was walking into a place with a few friends when Zion approached him and asked if the male barbie’s phone is an iPhone 13.

As soon as Bobrisky replied in the affirmative, the comedian asked to touch the phone as he had not touched one before, a feature Bobrisky did not allow.

Zion later resorted to force while raising his voice to say that his girlfriend paid the male barbie the sum of N7m and he has not been answering his phone.