Cassper Nyovest is celebrating a major business achievement. The rapper’s sneaker line has made its way onto a major billboard on Witkopen road in Johannesburg.

Things are looking up for Cassper Nyovest in the business world. The media personality’s shoe line has really taken off and he is feeling all of the pride in himself.

TimesLIVE reported that Cassper took to his Instagram stories to share the exciting news of Rootoffame being displayed on its very first billboard. 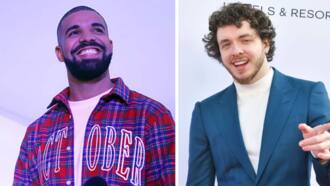 This was a moment worth celebrating for Nyovest who has been working on this project since July 2021. He said:

“How crazy! First Root of fame billboard right on Witkopen.”

The rapper signed a R100 million deal with Drip Footwear to allow him to bring Rootoffame to life. Cassper told SowetanLIVE that building this sneaker brand did not come easy.

“My fame didn’t matter, for the first time in my life it was useless. I asked myself how I can package this fame and sell it. I had to make a product that not only is associated with my name but gives people a taste of how it feels to be me. I had to dig deep into the roots, hence the name ‘The Root Of Fame.” Cassper Nyovest is a fan of Jay-Z’s music. The South African rapper sparked a heated debate on social media

He slammed the new generation of hip-hop followers for not giving the US rapper his flowers while he is still alive.

Some rap heads agreed with Mufasa while many others shared that Jigga doesn’t have enough hits to be rated as the GOAT in hip-hop.