-The religious leaders advised Buhari on how to respond to criticism

The Catholic Bishops in Nigeria have called on President Muhammadu Buhari to address the insecurity and unemployment in the country.

Premium Times reported that the Catholic Bishops’ Conference of Nigeria (CBCN) call in a statement issued by its president, Augustine Akubeze.

The religious leaders advised the president to refrain from focussing his energy on critics who disagree with his performance.

The group said all Nigerians have the right to critic the government irrespective of their political leanings. 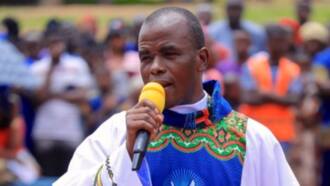 Hours after resurfacing in Enugu, Father Mbaka reveals those behind his “disappearance”

The Catholic leaders affirmed their stance against the undemocratic transfer of power.

They however accused the president of delegating his obligation of concern for the welfare and security of the people to spokespersons.

The bishops described the recent allegations by the presidency and the State Security Service (also called the DSS) of a plot to impeach Buhari as needless.

Meanwhile, Rev Father Ejike Mbaka has discredited claims by the presidency alleging that he (Mbaka) is aggrieved with President Muhammadu Buhari because the president did not award contracts to him.

Vanguard reported that the Spiritual Director of the Adoration Ministry, Enugu, in a sermon on Sunday, May 2, described the allegations against him as childish and laughable.

The cleric, however, admitted that he led three men to meet with the president during his first tenure. He Mbaka explained that the men were security experts who had offered to help in solving Nigeria’s security challenges.

In another news, Reverend Father Ejike Mbaka has revealed where he went to when an allegation that he was missing sparked a protest on Wednesday, May 5.

The cleric who showed up after some hours of the protest said the Bishop of Enugu dioceses, Callistus Valentine Onaga, summoned him for a meeting and planned to close his ministry and keep him for 30 days.

According to BBC Pidgin, Mbaka told his congregation that the Bishop later allowed him to go and address the protesting crowd who had flooded the streets of Enugu over the allegation that he was missing.