He reportedly died in the United States of America where he lived in recent years.

Nikki Laoye said on her official twitter handle: ” Oh my God…My dear brother, Dr Frabz @DoktaFrabz.. This is such terrible news. Just heard that he was shot… Who did this? I am so pained Right now.. What kind of news is this ehn?” 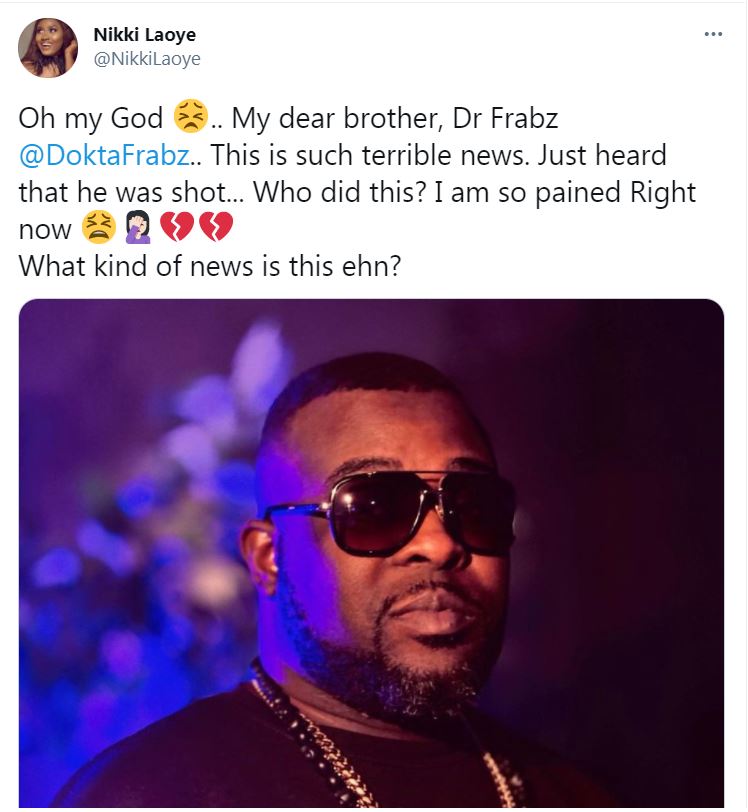 Dokta Frabz was born and raised in Lagos, where he started his music career.

He began his music career at Archbishop Vining Memorial Church Cathedral in Ikeja, Lagos as a pianist and drummer.

Dokta Frabz has worked with top artists, including Wizkid, Omawumi, Davido and the late Dagrin.

He started off working for Don Jazzy and D’Banj’s Mo’ Hits Records where he had the chance to meet several artists.

He enjoyed mainstream success with his works with the late Dagrin on the song ‘Thank God’, ‘Joy’ off Wizkid’s sophomore Ayo, four songs on Naeto C’s sophomore Super C Season and his several hits with regular collaborator Omawumi.

In 2009, the producer and singer Omawumi had a public relationship that ended the following year.

He also produced hit songs like Chuddy K’s ‘Slow Slow’, Shank’s ‘Too late’ and Weird MC’s ‘Riranwo’ among others.

In 2014, he was the music director for the fourth season of Nigerian Idol.

Many Nigerian celebrities, entertainers have taken to social media to mourn his demise.

“One of Nigeria’s legendary producers just died. Sad day for me,”…Rip legend! Ayo (dr Frabz) We spoke 2 weeks ago u asked how is Houston treating me? I came to Maryland yesterday only for me to hear that u are no more today. What a sad day! A brother is gone! Another producer is gone! RIP!” Samklef tweeted.

@VectorThaViper tweeted: “Woke up to a tweet about Dr. Frabz passing away… can’t really say we were close but in our few meets he seemed like an easy person. May God strengthen his family.

DJ Neptune said: “Rest in paradise my brother my friend. Ayo (Dr Frabz) We had big dreams but God knows best. I’m grateful for the life you lived and the hits you made. You are a genius, your legacy will live forever. Good night Frabinabebo aka Jugunu.”