– General Yahaya spoke on his mission and vision as he met with the senior leadership of the army on Monday, May 31

FCT, Abuja – The Chief of Army Staff (COAS), Major General Faruk Yahaya, on Monday, May 31, unveiled his vision and mission for the Nigerian Army when he addressed the senior Army leadership in Abuja.

Leadership reported that General Yahaya promised that the Nigerian Army under his watch will defeat terrorism with modern processes, strategies and tactics.

The COAS pledged to provide exemplary leadership to the Nigerian Army and serve as a rallying point for officers and soldiers while widely consulting with critical stakeholders. 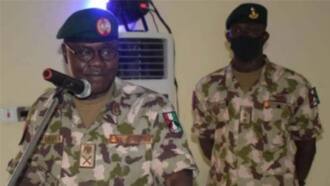 “Nigerian Army of the present must by necessity with the changing nature of the current situation, sit up and develop modern processes, strategy and tactic over our enemy in kinetic and non-kinetic battles, win hearts and minds and safeguard our territory.

To achieve his mission, the COAS said he will deploy wide consultation and group decision making at all levels and build on the foundations laid by his predecessors including the late COAS Lt Gen Ibrahim Attahiru.

While pledging to lead with a sense of sincerity and accountability, General Yahaya said his command philosophy will rest on four pillars, namely:

The COAS said he assumed command rather in an unexpected manner following the demise of the former COAS, Lt. Gen. Ibrahim Attahiru and promised to support families of fallen heroes. 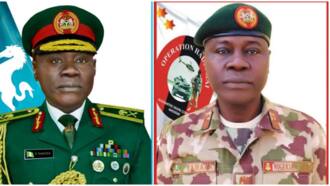 He restated his commitment to President Muhammadu Buhari and assured the Nigerian Army’s determination to protect the nation’s territorial integrity, a statement seen by Legit.ng also indicates.

“Take the war to the terrorists, bandits and ‘unknown’ gun men.”

“Proud of our United States of Nigeria Military. Best ever Military in Africa and worldwide.”

“Congratulations on your elevation, Chief of Army Staff. You have commanded to lead NA to win over every territory under Nigeria, but what is your plan for Nigerians in these territories you intend to win over? That should be considered too.”

“Really his appointment is a well-deserved at the right time to the right person.

“We hope and wish that NA will give him maximum cooperation to accomplish his vision and mission to defeat all security challenges and dealt with all criminals in our dear nation. 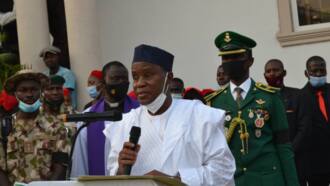 “I finally pray to Almighty Allah who in His Infinite mercies blesses us with Dedicated and Intelligent Chief of Army Staff. I wish you all the best and congratulate you once again.”

Earlier, Legit.ng reported that a group named Nigeria First commended President Buhari over his choice of Major General Yahaya as the new Chief of Army Staff.

The group in a statement signed by its vice-president, Leonard Aluor, and seen by Legit.ng said the appointment of Yahaya as a successor to the late Lieutenant General Attahiru who died in an ill-fated air crash is applaudable.

Aluor said Yahaya’s appointment is evidence of the president’s commitment to the war against insurgency and insecurity across Nigeria.