Borno state – The provost, College of Nursing and Midwifery, Rukaiya Shettima Mustapha has been issued a query for suspending some students under the guise that they failed to join their colleagues in welcoming President Muhammadu Buhari.

Legit.ng gathered that Juliana Bitrus, the state commissioner of health and human services sent the query demanding a response from the provost in 48 hours why disciplinary action should not be taken against her. 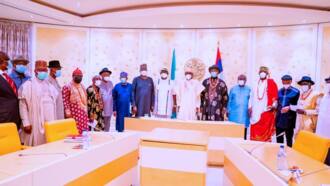 This was made known in a statement shared on the Facebook page of the Borno state government on Friday, June 25.

Juliana in a letter dated June, 25, distanced the state government from the actions of Mustapha, saying she acted on her own.

The commissioner described the provost as being mischievous, adding that she made such a decision without recourse to any official at her ministry and directives from anyone in the state government.

She said though it was a normal practice that students join in welcoming visiting presidents, however, such acts are voluntary.

The commissioner expressed concern that the provost may have used the president’s visit to get at some students she may have had issues with.

It would be recalled that President Buhari arrived Maiduguri, the Borno state capital, to commission some projects executed by the state government.

The presidential jet landed at the Nigerian Air Force wing of the Maiduguri International Airport at 11 am on Thursday, June 17.

The president was received by the state governor, Professor Babagana Zulum, members of national and state Houses of Assemblies, service chiefs, among others.

Earlier, Legit.ng reported that a Nigerian student was given a suspension letter by a college for not welcoming the president of Nigeria during his last visit to Borno on June 17th.

A copy of the suspension letter shared on Instagram by @instablog9ja has it that the penalty took effect on June 21st. The identity of the student could not be confirmed.