Irate youths protesting the incessant killings and abductions in Zurmi, a local government area of Zamfara state, have attacked the palace of the Emir of Zurmi.

Footage of the attack captured by TVC News showed that a section of the palace was torched by the protesters.

As at the time of making this report, neither the police nor the Zamfara state government had issued any statement about the incident.

Several communities in Zamfara state have been overrun by bandits, recently, suspected bandits killed at least two policemen during a gun battle on Saturday night, May 23, in Magami town, Gusau local government area of Zamfara state.

The sad incident has been confirmed by the spokesman of the Zamfara state police command, Muhammad Shehu, The Nation reported.

He said the bandits stormed Magami town to attack the community but police operatives moved in, based on intelligence, and engaged them in a gun battle, stated The Cable.

In another attack, armed bandits reportedly have killed 10 people and dozens of locals in five villages in the Bungudu local government area of Zamfara state.

According to a report by The Punch, the bandits who were on motorcycles invaded Dandamji, Gidan Runji, Doka, Yanmadanga, and Yarkatsina villages on Monday evening, May 24.

An indigene of the area, Musa Sani, who was quoted in the report, said the bandits also carted away a large number of domestic animals. 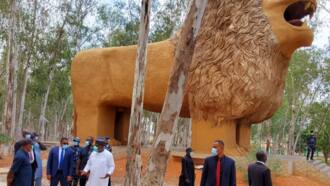 In another news, Malam Umaru Sanda, the village head of Magira in Sabon Birni local government area of Sokoto, was on Tuesday, May 25, killed by armed bandits.

Eyewitnesses claim that the bandits also kidnapped a 16-year-old girl in Garin Idi area of the state after attacking a village known as Magira, Daily Trust reports.

Although the criminals were said to have released the girl, they also kidnapped two persons at the neighbouring village of Rambadawa.