– However, the tension generated by the issue was resolved when Mbaka resurfaced

There is uncertainty surrounding the whereabouts of a Catholic priest, Reverend Father Ejike Mbaka, the Spiritual Director of Adoration Ministry Enugu Nigeria (AMEN).

A group, Ohanaeze Ndigbo Youth Council Worldwide (OYC), in Enugu on Wednesday, May 5, raised an alarm, claiming that the whereabouts of Mbaka is unknown, The Punch reported.

The group accused the federal government of being behind the reported disappearance of the cleric.

“We are giving the Federal Government 48 hours to produce the priest, else they should be ready to face Igbo youths. They were dining and wining with him all along and now that he told the truth, they are no longer comfortable with him. 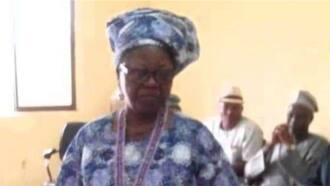 Just in: Author of Nigeria’s National Pledge, Prof. Adedoyin, passes on at 83

“Let nothing happen to Rev. Fr. Ejike Mbaka. It will not be in anybody’s interest.”

However, the Department of State Services (DSS) has denied detaining the cleric.

The spokesperson for DSS, Peter Afunnaya, told The Punch via text message that:

The Nation reported that the secret police dismissed claims by the youth group alleging that Mbaka was picked up by security operatives for demanding the resignation or impeachment of President Muhammadu Buhari over worsening insecurity in the country.

”This is not true. Fr Mbaka was not picked up by the DSS. Rev Fr Mbaka is not with the DSS. The DSS did not pick him up, please.”

Meanwhile, the confusion surrounding Mbaka’s whereabouts was resolved after the cleric resurfaced in Enugu state on Wednesday, May 5 around 2pm.

The Punch reported that Mbaka returned in a vehicle to the jubilation of his supporters.

Legit.ng recalls that Mbaka had warned that heaven’s anger will descend on the Muhammadu Buhari administration if the government fights him.

The controversial Catholic priest said this on Sunday, May 2, adding that he speaks against the government on behalf of the Nigerian masses, The Punch reported.

He also prophesied that there was an imminent disaster in Nigeria just as he charged the government to provide employment opportunities for the youths.