– Ondo state governor, Rotimi Akeredolu made the statement at the southwest zonal public hearing on the review of the 1999 Constitution

Akure, Ondo state – The governor of Ondo state, Rotimi Akeredolu has said the upper chamber of the National Assembly should be scrapped amid the ongoing process of amending the 1999 Constitution.

The Punch reports that the governor stated this on Tuesday, June 1, at the southwest zonal public hearing on the review constitution, held at the International Cultural and Event Centre, Akure.

Akeredolu who was represented by his deputy, Lucky Aiyedatiwa also called for a unicameral legislature for Nigeria. 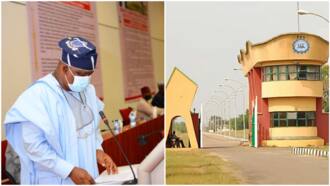 According to the governor, the assembly should be on a part-time basis in other to reduce the cost of governance, Daily Trust reports.

Aiyedatiwa speaking further said the governor’s position of the state was for the Federal Government to be reduced in weight and responsibilities.

“The position of the Ondo State Government has been made public. We advocate for a Federal Government largely reduced in size and scope of engagement. We want to see a Constitution that will enhance the performance of public office holders at all levels.”

House of Reps suspends of the constitution review hearing

Meanwhile, the planned zonal public hearing on the review of the 1999 Constitution scheduled for Imo and Abia states has been postponed.

The House of Representatives suspended its constitution review hearing in a statement issued by Idris Wase, the deputy speaker of the House.

According to Wase, on Sunday, May 30, the hearing scheduled to take place on Tuesday, June 1, and Wednesday, June 2, was suspended until further notice.

A pan Yoruba socio-political association, Afenifere, has stated that the ongoing public hearing by the National Assembly on the review of the 1999 constitution would not solve the myriad of challenges confronting Nigeria.

The group, which stated this on Thursday, May 27, emphasised that the constitution review was an exercise in futility.

the general secretary of the group, Sola Ebiseni, said that Afenifere decided not to submit a memorandum at the public hearing because the session of the two arms of the National Assembly, since 2007, did not yield results.