Channels TV reported that the presiding judge, Justice Oludotun Adefope-Okojie, nullified the judgement of a high court which had restored the Bachelors’ degree certificate of the former governor.

Legit.ng gathered that the state university had in 2013 withdrawn Kalu’s certificate over allegations of fraud and breach of admission regulations concerning his graduation.

However, the former governor who is now a serving senator later approached a state high court in Isikuato in Abia state to challenge the allegations and the subsequent withdrawal of his degree by the university.

Ruling in favour of the Abia State University, the appeal court held that the state high court in Isikwuato lacked jurisdiction over the matter.

Justice Adefope Okojie in her verdict said that the Isikwuato high court had no jurisdiction to preside over the certificate issue.

According to The Punch, the appellate court held that Senator Kalu ought to have exhausted all the remedies available to him before approaching the court to challenge the decision of the Senate of Abia State University to strip him off the degree certificate. 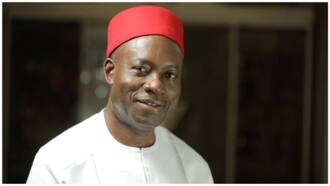 In other news, Senator Kalu paid a visit to Nnamdi Kanu, the leader of the outlawed Indigenous People of Biafra (IPOB), who is in the custody of the Department of State Services (DSS) on Monday, November 29.

In a post sighted on his verified Facebook page by Legit.ng, Senator Kalu, a former governor of Abia state and current chief whip of the Senate, said he met Kanu in “good health and care”.

“This afternoon, I visited my brother, Maazi Nnamdi Kanu in DSS custody, Abuja. I met him in good health and care and we discussed as ‘Umunne’.”