Cristiano Ronaldo of Juventus has been crowned as the fans’ favourite player of the 21st Century ahead of the EURO 2020 beating Barcelona legend Andres Iniesta in the final result of polls conducted.

According to the report on GMS and also BBC, there was a 64-man shortlist comprised of the 21st Century’s best European players.

These 64 footballers which included the likes Zinedine Zidane, Zlatan Ibrahimovic were split into 16 different groups.

And after all the stages, Cristiano Ronaldo and Iniesta got to the final in which the Portugal international won 56% – 44%. There is no doubt about the fact that Cristiano Ronaldo is one of the best footballers on earth considering the awards and titles he has own so far in his professional soccer career.

The Portugal international started his football career on the streets of Portugal before been spotted by those in charge then at Sporting Lisbon who signed him.

Ronaldo proved himself at Sporting Lisbon with incredible performances which caught the interest of former Manchester United gaffer Sir Alex Ferguson who lured him to the Premier League.

And at Old Trafford, Cristiano Ronaldo performed well for the Red Devils winning the Champions League, Premier League and also the Ballon d’Or award before moving to Real Madrid.

Ronaldo is currently playing for Juventus in the Italian Serie A and the Portuguese will hope to lead his country to success in the EURO 2020.

Earlier, Legit.ng had reported how Cristiano Ronaldo picked up his only trophy for Juventus last season and the striker showed that it meant a lot to me when slept off with his arms wrapped around the silverware. 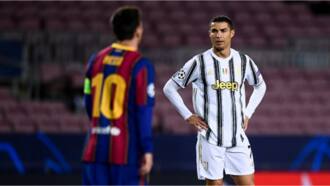 The Bianconeri have had a difficult campaign under new manager Andrea Pirlo with their hopes of qualifying for the Champions League hanging in the balance.

There was still something to smile about when the Old Lady defeated Serie A rivals 2-1 in the Coppa Italia final.

Juve were beaten in last season’s final by Napoli but did not allow history to repeat itself with Dejan Kulusevski and Federico Chiesa scoring in each half of the match.

Ronaldo did not find the back of the net but it did not matter as Juventus won the Coppa Italia in style at the Stadio Mapei, home ground of Serie A club Sassuolo.