Cristiano Ronaldo has been conspicuously omitted from the 23-man Champions League squad of the season.

The 36-year-old scored four goals and assisted two others in six UCL games however, his individual brilliance was unable to help them go beyond the last 16.

Juve were dumped out of the competition by FC Porto despite playing 4-4 on aggregate after both legs of the round. Meanwhile, Lionel Messi whose Barcelona team crashed out at the same stage as the Old Lady made the shortlist dominated by players of the winning team Chelsea.

The Argentine scored five times and assisted two goals in six games but his Calatan club was humbled out of the competition by Paris Saint Germain 5-2 on aggregate.

However, seven Chelsea players including history-making Edouard Mendy were named in the squad while five of Pep Guardiola’s men were also selected.

Robert Lewandowski, Kylian Mbappe, Neymar, Erling Haaland, and Karim Benzema made the squad of the season. 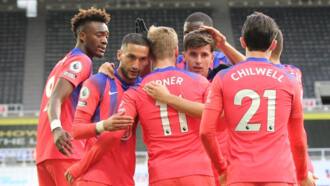 Legit.ng earlier reported that Olivier Giroud and Cesar Azpilicueta have taken Chelsea’s Champions League celebrations a notch higher after being spotted dining with the European trophy.

The two were pictured making merry with the coveted trophy on the side just hours after their triumph over Premier League rivals, Man City.

The Blues stunned their opponents by a solitary goal scored by Kai Havertz to lift the title at Estadio do Dragao in Porto, Portugal.