A burial ceremony has been attacked by armed men suspected to be members of a secret cult. The burial was that of a suspected leader of a cult group, named Ozo.

The criminals invaded the burial ceremony in Ebenebe, Awka North local government area of Anambra state. About 20 people were killed by the criminals.

They also dishonour the corpse that was being prepared for burial, Punch Newspaper reports.

The corpse of Ozo was reportedly lying-in-state in his compound when the cultists arrived at the scene and shot at the mourners while others scampered to safety.

Quoting a source, the newspaper reported:

“My sister was supposed to be at the burial. She and her friends had already prepared to leave Awka for Ebenebe, but the vehicle they booked to take them disappointed them.

“She and her friends were so unhappy, and they decided to go in search of another vehicle that can take them. It was in the course of going to the burial that they received a phone call that everybody at the burial had been dispersed by some gunmen.

“There is a video from the scene, which showed several persons lying in the pool of their own blood dead, while the corpse was desecrated, with its coffin lying far apart and sprawling on the ground.” 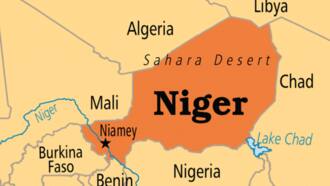 A police inspector reportedly sustained injury in the attack while his riffle was seized. According to a source from Kolo community, the incident occurred few minutes to midnight on Monday.

He said when residents heard the shooting, they thought it was militants that were attacking the community.

Although there are unconfirmed reports that a police Inspector was killed, police spokesman in Bayelsa state, SP Asinim Butswat, said that the Inspector only sustained injury. Butswat, while confirming the incident on the Bayelsa state police media WhatsApp group, said investigation is ongoing.

In a related development, in the opinion of Governor Douye Diri, Nigeria is going through security issues due to the greed of many politicians who think only of themselves.

The Bayelsa governor on Tuesday, August 31, claimed that the partisan sentiment of most leaders in the management of the country’s ample resources is partly responsible for the current crisis.

Governor Diri added that this has resulted in insurgency, kidnapping, political, social, health, and food insecurity.