The self-styled celebrity barman was seen lying down without wearing a shirt on a field as he was getting a massage.

In the short video, a masseuse was seen giving the socialite a body rub while popular footballer, Emenike, and other onlookers laughed at the funny sight. 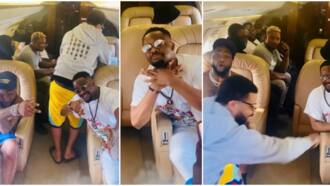 In the caption of the funny video, Chiefpriest claimed his friend, Emenike, set him up.

See the funny clip below:

After the video was posted by the celebrity barman on his page, it didn’t take long for other people to agree that it was an hilarious clip.

A number of celebrities such as Davido, Peruzzi, Pretty Mike, DJ Neptune and more, took to the comment section to express their amusement.

The celebrity barman has always been known to live the good life and it came as no surprise to many when he decided to expand his garage by adding a brand new car to it.

Chiefpriest recently acquired a brand new Geely automobile and he wasted no time in taking to social media to share the news with fans.

Cubana shared a photo of himself seated inside the luxury new ride that was still covered with plastic wrap as he held his receipt.