The Defence Headquarters (DHQ) has dismissed reports linking troops to alleged killings of some innocent residents in the Konshisha area of Benue state.

The dismissal by the DHQ was in reaction to reports that troops avenging the killing of 11 soldiers had killed dozens of people in the state, The Cable reported.

‘’The Defence Headquarters wishes to put it on record that apart from these initial 10 bandits, there are no other civilian casualties recorded in any part of Konshisha till date. 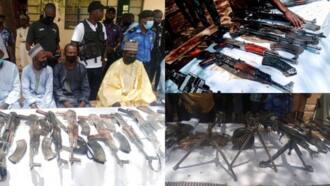 “We therefore challenge anybody from Konshisha to present to the public the 200, 70 or 30 dead bodies of innocent persons, male, female or children killed by troops in Konshisha. There was never a massacre as being touted by some mischief makers.’’

According to The Guardian, the military explained that bandits occupied settlements deserted by villagers and used them as a staging area to attack troops.

“Knowing the implications of killing troops in cold blood, most of the villagers fled their homes which were then occupied by armed bandits who kept firing at troops from the settlements as they advanced into Konshisha.

“Troops repelled the attacks and destroyed the houses and other buildings which the criminals used as hideout for the attacks.”

The chairman of the forum, Simon Lalong, made the call on Saturday, April 10, in a congratulatory message to the new police boss, Premium Times reported.

Lalong in a statement through his spokesperson, Makut Macham, said Alkali deserves the new role considering his track record of service to the nation.